I recently got my first box from Imperfect Produce, and I was so excited that I decided to share my thoughts on the experience so far. This post is not sponsored; I just wanted to spread the word about a company that I believe is doing great things!

If you’re not already familiar with them, Imperfect Produce is a company that delivers the produce that has been rejected by grocery stores directly to consumers at a discount. According to their website, 1 in 5 fruits and vegetables grown in the U.S. don’t meet the cosmetic standards of grocery stores, resulting in 20 billion pounds of produce going to waste every year. Items that are irregular in size, have surface scratches, are surplus, or are marked with expiration dates less than a few months away get rejected by grocery stores and could end up going to waste. That’s where Imperfect Produce comes in. By buying “imperfect” fruits and veggies, you can fight food waste support farmers, eat healthy, and save money. 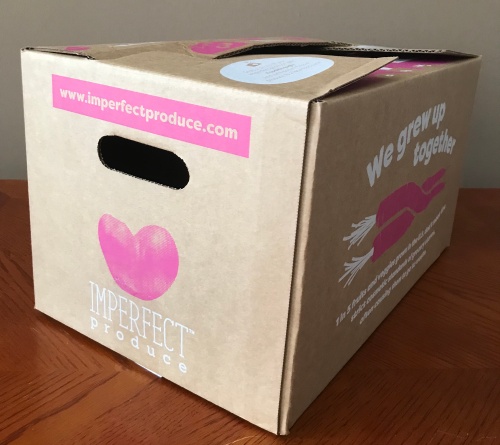 Imperfect Produce is only available in select cities for now, but I have a feeling they will expand to more locations in the near future. I recently moved to a city where they are available, and I was so excited to try it out that I ordered my first box before I even finished unpacking!

One thing that I love about Imperfect Produce is there are several different boxes to choose from, and each one is fully customizable. I used to get community-supported agriculture (CSA) boxes, and I had no say in the items I received. At first it was fun to try new vegetables and learn how to cook them, but after a while I got tired of trying to figure out what to do with items like beets, which I can’t stand, and carrots, which I love but had more than I knew what to do with. Imperfect Produce, on the other hand, makes it incredibly easy to customize your box on their website before it gets delivered.

I also think Imperfect Produce is much better value for money than my CSA box was. Imperfect Produce says their prices are up to 30% lower than grocery store prices. The organic produce box that I chose is approximately $20 (depending on the exact items you choose), plus $5 for shipping. My CSA box was also $20, but it came with far fewer items, and although the items were all locally grown, they weren’t necessarily organic. Also, I love that the Imperfect Produce box is delivered to me so I don’t have to go out of my way to pick it up like I did with the CSA box.

As far as the produce itself, the quality of my first box seemed really high. My boyfriend and were going through the box after it arrived, and neither of us could find any serious imperfections in the fruits and vegetables. The sweet potatoes were definitely a lot smaller than you would normally find in the grocery store, but otherwise everything looked great!

There are some items packaged in plastic (such as the carrots and mushrooms in this box), but considering the fact that these items may have gone to waste anyway if I hadn’t purchased them, I don’t mind so much. Plus, when you are customizing your box, the website tells you how certain items are packaged, so it’s actually pretty easy to avoid plastic packaging. For example, I swapped out the cherry tomatoes in clamshell packaging for regular size, package-free tomatoes.

I will definitely continue to order my fruits, vegetables, and the occasional miscellaneous item from Imperfect Produce, and if you live in a city where they deliver, I highly recommend you check them out too! Use this link to save $10 on your first Imperfect Produce box, and be sure to let me know what you think!

Hi! My name is Laura, and I believe that everyday actions can make a difference in the world. I started this blog to share my journey of adopting simple, sustainable changes for a more eco-friendly lifestyle. Join me, and together we can build a better planet.

Sometimes I really hate living in this country, and in a red state no less. It’s been an infuriating couple of days, but spending time on the homestead helps bring calm. The girls 🐔 have the best view of the sunset, so I went out to join them last night to soak up this view. 🌅
Garden update: tomatoes are developing some color, eggplant has its first flower, and lettuce is shockingly still kicking in spite of the extreme heat we’ve had! How’s your garden doing?
So excited about this week’s haul from the farmer’s market!!! 🥦🍓🫐🍞🥕
Traded in my very old, second-hand phone for a newer model, and I decided to get a compostable @pelacase to go with it (this one just spoke to me! 🪴😏)! The coolest part is that you can send them your old case (even if they didn’t make it) to recycle! Circular consumption for the win!
Say hello to my newest furry friend!! This sweet girl is a service dog in training! Earlier this year, I applied to be a volunteer with an organization that trains dogs for people with disabilities. After completing an 8-week training program, I finally have my first dog! She will only be with me for a few weeks to help get her exposed to different environments, but I’m SO excited to have her!! I’m mentally preparing myself for what I know will be a rough goodbye, but meanwhile I’m enjoy the time we have together, and reminding myself I’m helping to prepare her to support someone who really needs her! Plus, it’s awesome to be able to take her with me everywhere I go!!
Garlic scapes have appeared!! 🧄 I’m snipping off the ones that have started to curl, so that the plant will focus its energy on the growing bulb. Very excited to chop up the scapes and add them to tonight’s dinner, used in the same way as garlic cloves. 😋